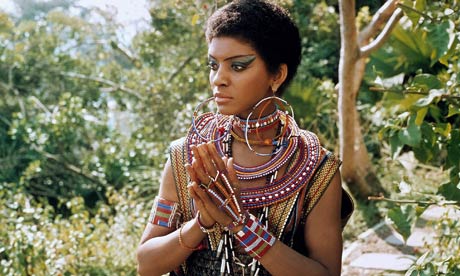 Without question, one of the most breathtaking beauties to emerge out of the 70’s “Blaxploitation” era was actress Vonetta McGee. This lovely sister, born in San Francisco on January 14, 1945, possessed the complete package; looks, talent and determination which should have made her a marquee name in Hollywood. Instead, this tantalizing, tan, and talented lady found herself in in the land of Blaxploitation, where her some would considerable her talents were laid to waste. Although the air was thick with civil and social issues, still, a beauty such as Vonetta’s would rarely go unnoticed. She was encouraged to participate in the Miss Bronze California beauty contest, where she walked away with the crown. A film career followed and Vonetta took off for Europe where she earned small roles in several low-budget movies. She returned to the States in 1969 and won a small part in the film The Lost Man, which starred Black screen icon, Sidney Poitier. The film got her some notice, but it would be three long years before she would get her first major movie role. In 1972, Vonetta was cast in the murder mystery Melinda, playing the title character. Although her part was small (she is murdered early on in the film), it was vital, earning her rave reviews from both the New York Times and Village Voice, which both proclaimed her “the most beautiful woman in film!” Over the next few years, Vonetta’s resume would fill up with leading lady roles in “blaxploitation classics” such as Blacula, Shaft in Africa and Detroit 9000. She was working steadily but the roles were far from challenging. More often than not, she was cast as the supportive, understanding girlfriend, whose primary lot in life was to look cute and not get in the way of their super-macho male co-stars. Whereas Pam Grier, at the same time, was cementing herself as Hollywood’s first Black Super-Woman, Vonetta was still waiting for the meaty role which would make her a household name. Ironically, she had lost an opportunity to play a super-heroine herself when the lead role in the 1973 film Cleopatra Jones, which was written by her then boyfriend, Max (Julien of The Mack fame), went instead to super model Tamara Dobson. Blacula, Shaft in Africa and Detroit 9000 Movie Posters are a part of The Museum of UnCut Funk collection

Throughout the period, Vonetta continued to work but had yet to see an A-Budget script. In 1975, that changed when Clint Eastwood chose her to star alongside him in The Eiger Sanction, which he also directed. It was a bit of cinematic history, being that it was the first time a Black actress had been cast as the female lead in a mainstream Hollywood film opposite a white actor. Sadly, the role gave Vonetta about as much to do as her “Blaxploitation” films had, leaving her still knocking at stardom’s door by Hollywood’s standards. To Sleep With Anger

The Museum of UnCut Funk is shocked and saddened at the passing of Vonetta McGee on July 9, 2010.