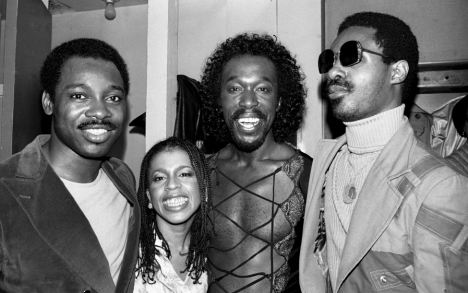 Nick Ashford, one-half of the legendary Motown songwriting duo Ashford & Simpson that penned elegant, soulful classics for Diana Ross and Marvin Gaye, has died at the age of 69 from throat cancer. Nick Ashford, one-half of the legendary Motown songwriting duo Ashford & Simpson that penned elegant, soulful classics for Diana Ross and Marvin Gaye, has died at the age of 69 from throat cancer.

Over nearly five decades, Ashford and his wife Valerie Simpson wrote songs including Motown classics Ain’t No Mountain High Enough andReach Out And Touch Somebody’s Hand (recorded by Ross) and You’re All I Need To Get By (made famous by Gaye and Tammi Terrell) and they also wrote hits such as I’m Every Woman, which was a hit for Chaka Khan and, later, Whitney Houston. They also wrote the wonderful catchy soul song Destination Anywhere.

The pair also had success writing for themselves, with perhaps the biggest known hit sung by being the 1980s hit Solid As A Rock.

Ashford’s father, Calvin, was a construction worker and Nick got his musical start at Willow Run Baptist Church, singing and writing songs for the gospel choir. He briefly attended Eastern Michigan University, in Ypsilanti, before heading to New York, where he tried but failed to find success as a dancer. In 1964, while homeless, Ashford went to White Rock Baptist Church in Harlem, where he met Simpson, a 17-year-old recent high school graduate from South Carolina, who was studying music. Their first major success occurred when they came up with Let’s Go Get Stoned for Ray Charles. That song became a huge hit, and soon, they came to the attention of Motown Records and began penning hits for their artists. They started out writing for Gaye and Terrell; in fact, Ain’t No Mountain High Enough was originally their hit, until Ross later re-recorded it and made it her signature song.

The duo, who were married for 38 years, helped sell millions of records for several artists. They also had success as their own entity, but despite Solid As a Rock their hits dwarfed those that they penned for others.

In recent years, the pair continued to perform. They also were owners of the New York City restaurant Sugar Bar, where many top names and emerging talents would put on showcases. Verdine White of Earth, Wind and Fire said: “They had magic, and that’s what creates those wonderful hits, that magic. Without those songs, those artists wouldn’t have been able to go to the next level.” Among the other artists who had hits with their songs were Gladys Knight and the Pips (Didn’t You Know You’d Have to Cry Sometime) and Smokey Robinson and the Miracles (Who’s Gonna Take the Blame). Recently, they received a songwriting credit on Amy Winehouse’s songTears Dry on Their Own, which contains a sample from Ain’t No Mountain High Enough.

Ashford is survived by his wife and two daughters Nicole and Asia.