Jay-Z, Will and Jada Invest in Culture: FUNKIN’ Angela Davis/ The New Annie!

Will Smith, Jada Pinkett Smith, and Jay-Z are the producers for the films “Free Angela and All Political Prisoners” and “Annie.”  This marks Jay-Z’s company’s first two efforts in film.  In addition to starring in movies like “Independence Day”, “Enemy of the State”, “Wild Wild West”, “Ali”, “I Am Legend” and the franchise projects “Men in Black”; “Bad Boys”; “Hancock” and “I-Robot”… Smith has been at the helm of producing several films, including “Hitch”, “The Pursuit of Happyness” and “Seven Pounds,” all of which he also starred in.  Will has several starring and producing vehicles on deck over the next two years, including “After Earth,” sequels to ‘Hancock’ and ‘I Am Legend’ (that he’s starring in and producing), ‘I-Robot’ and the long anticipated “Bad Boys 3.”  Smith also produced the remake of “The Karate Kid,” which starred his son Jaden that appeared with him in ‘The Pursuit’.  Jaden takes a co-starring credit in the upcoming ‘After Earth’, but it’s not determined yet if he’ll return as “Dre” in the Smith produced “Karate Kid 2.” Smith and Carter first teamed up for the theatrical production of “Fela.”  A huge hit on Broadway, the show featured the talents of Patti LaBelle and Michelle Williams of Destiny’s Child during its run in New York on the “Great White Way.” Codeblack Films is the distributor for the new documentary “Free Angela & All Political Prisoners.”  A film that chronicles the life of young college professor Angela Davis, it’s Executive Produced by Overbrook Entertainment, founded by Will Smith and James Lassiter, and operated with partner Jada Pinkett Smith; and Shawn “Jay-Z” Carter’s Roc Nation.  The film tells the story of the former Black Panther’s incarceration and trial at the height of the Black Power Movement; and how she became one of America’s most renowned revolutionaries that was on the FBI’s 10 Most Wanted list.  Presented by BET Networks, the film will be released exclusively in select AMC theatres in Washington D.C., Los Angeles, New York, Chicago, Oakland, Philadelphia and Atlanta on April 5th, which is the 40th anniversary of Davis’ acquittal.  Directed and written by Shola Lynch, “Free Angela and All Political Prisoners” was hailed by the 2012 Toronto International Film Festival as “a fascinating chronicle of justice and strength,” according to the film’s publicist ThinkTank Media. “We at Overbrook Entertainment are very proud to support this intriguing documentary about the life of Angela Davis,” said Jada Pinkett Smith.  “Filmmaker Shola Lynch has done an incredible job in revealing a piece of American history we thought we all knew.”  Jay-Z added, “Shola Lynch has crafted an intricate and compelling film about Angela Davis.  Roc Nation is honored to be part of a creative collective that can present such a riveting story.”  “The journey and struggle to free Angela Davis is a defining moment in our country’s fight for political freedom and an integral part of African-American history,” says Loretha Jones, President of Original Programming, BET Networks.  “We are proud to be a partner in this film and to share powerful stories of justice such as this that will resonate with our audience.”  “This movie illustrates an important part of history, and we’re honored to provide a platform for the story to be told,” said Nikkole Denson-Randolph, Vice-President of alternative and special content at AMC.  “Although a commonly known moment in history, ‘Free Angela’ offers an entirely new and authentic perspective.”  For more on ‘Free Angela’, go to the following websites: Quvenzhané Wallis, the youngest actress in history to ever be nominated for an Oscar Award, didn’t win recently but she’s well on her way as an actress.  Sony Pictures announced shortly after the annual ceremony, that the young star is taking on the title role in the feature film adaptation of the classic musical “Annie.” Will, Jay and Jada had been on the hunt for a star to play the 11-year-old orphan with a heart of gold, ever since the Smith’s daughter Willow Smith dropped out of the film according to Buzz Feed Entertainment.  Director Will Gluck (“Friends with Benefits”/ “Easy A”) is currently re-writing the film’s screenplay, which already has a first draft penned by actress and screenwriter Emma Thompson (“Sense and Sensibility”), which was then handed off to “The Devil Wears Prada” scribe Aline Brosh McKenna. Wallis’ second feature film to her outstanding performance in “Beasts of the Southern Wild,”  will be in the upcoming fact-based period drama “Twelve Years a Slave.”  The film stars Chiwetel Ejiofor, Brad Pitt and Michael Fassbender, with up and coming director Steve McQueen of “Shame” fame.  Although she’s one of todays new actresses to watch, Quvenzhané still enjoys being a child.  She says her favorite pastimes “are reading, singing, dancing, acting, and playing her iPod and Nintendo DS.  Her favorite TV stars/singers are China McClain, Selena Gomez, and Miley Cyrus.  Her favorite sports are basketball, volleyball, dance and cheerleading.”

Jay famously sampled “It’s a Hard Knock Life” for his 1998 hit “Hard Knock Life (Ghetto Anthem).”  According to Deadline.com, Jay says:  “For Marcy Media’s first foray into (a feature) film, we couldn’t ask for better partners and mentors than Overbrook Entertainment.  We are excited to work with Will Gluck and Sony Pictures Entertainment.  My well-known affinity for the classic ‘Hard Knock Life’ makes Annie a natural vehicle to lead us into the world of the cinema.”

Originally a comic strip, the first Broadway presentation of “Annie” opened in 1977.  The first movie adaptation was released in 1982 by Columbia Pictures.  It starred Aileen Quinn as Annie.  The Broadway revival opened in October of last year, and the new film is scheduled for release next Christmas of 2014. 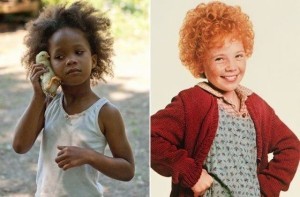 for the LOVE of FUNKY film