Stevie Wonder, Kings of Leon, Alicia Keys and John Mayer will headline the second Global Citizen Festival in Central Park on September 28th according to a USA Today article.  The event is timed around the United Nations General Assembly meeting in New York.  The United Nations General Assembly meeting promotes a movement to end extreme poverty by 2030.

Last year, a lottery for people to participate in the campaign via social action to end poverty, resulted in the distribution of 54,000 tickets.  Those that will be allowed to attend the show, will be selected by the same means this year.  Additionally, approximately 6,000 VIP tickets will be sold through Ticketmaster, and all the net proceeds will go to charity.  To qualify for free tickets, people can visit http://festival.globalcitizen.org and earn points through multiple means of social actions, including watching videos, signing petitions and buying artist merchandise.  The Cotton On Foundation is the festival’s presenting sponsor, who will be selling artist merchandise at their 150-plus stores around the country.

Ironically, I “wonder”-ed recently if Stevie had any plans to do new music soon.  This past April, backstage at the Academy of Country Music Awards, Wonder told reporters that he’s working on a few projects.  Among them, is a collaboration with producer David Foster called “When the World Began.”  Stevie said, “He’s put together some incredible arrangements to songs that I’ve done before with the London Symphony Orchestra that we’re gonna do.”  Details as to when any of the legendary musicians new endeavors will be released are tbd. 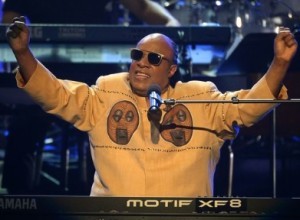 I’ve also found myself wanting to hear some new music from the Kings of Leon.  Currently re-visiting the band’s last two releases “Come Around Sundown” and “Only By the Night”, something said to me, “Don’t they have a new album out”?  Turns out, after googling, I found they’re actually releasing a new CD in September!  Titled “Mechanical Bull” it features the first single “Supersoaker,” which drops on on July 17th.  The band debuted the new song at New York’s Governors Ball festival last month.  Before performing it, lead singer Caleb began with a disclaimer, saying “We’re going to play a song we never played before. So if we mess it up, it’s your fault.”  Here’s a clip below:

Kings of Leon did the unconventional for the production of their new CD.  They told radio station KROQ: “We actually bought this old paint factory and turned it into a studio,” says Caleb.  “The songs were coming from a good place and we wanted them to be a little more lighthearted than some of the stuff we’ve done in the past.”  Due to the informal nature of their studio, he also expressed, “you could hear a lot of really natural things happening [on the recording].  A lot of times there was somebody in the background shooting basketball.”  “Mechanical Bull” hits stores on September 24th.  BTW, Caleb recently became a daddy to his three-month-old daughter with Victoria’s Secret model, Lily Aldridge. For Wonder Love, Kings of Leon and the Citizens of the World