ALL ABOUT ALBERT & ALLEN – The Hughes Brothers The Hughes Brothers set it off in the world of cinema with their gritty depiction of South Central L-A ala the film “Menace II Society” in 1993.  A ghetto opus captured on screen, it made John Singleton’s “Boyz N The Hood” of two years prior look like a Disney movie.  After four releases under their preverbal belts as a directing duo, the brothers Executive Produced their fifth release “Scratch.”

Both Hughes brothers have now done short film projects individually, as well as directed movies for television.  The brothers have also started directing full-length films on a solo basis as well. 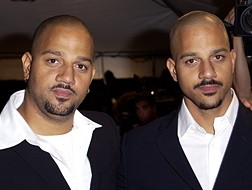 “Broken City” marked the solo feature film debut for Allen, who directed a segment of “New York, I Love You.”  “New York, I Love You” was the second installment of a series of films by producer Emmanuel Benbihy.  The first was “Paris, Je T’Aime,” which featured a segment directed by the Coen Brothers https://museumofuncutfunk.com/2013/07/29/the-funkin-coen-brothers/.  Starring Mark Whalberg and Russell Crowe, ‘Broken City’ is a tale about a city immersed in injustice, where ex-cop “Billy Taggart” seeks redemption and revenge after being double-crossed and subsequently framed by its most powerful citizen, “Mayor Nicholas Hostetler.”  Albert is currently in production on his solo feature debut “Motor City,” which tells the story of a recently released felon seeking revenge against the people who framed him and put him in jail.  The stars for that film have yet to be announced.

After ‘Menace’, which starred Tyrin Turner and Jada Pinkett Smith, the guys dropped the flicks “Dead Presidents”; “American Pimp”; “From Hell”; and “The Book of Eli.”  All the projects thus far from the dynamic film duo have taken place in aspects of the underworld or from a dark place.  I’m not saying this anticipating them to do something bright and sunny, but merely to give one not familiar with their works an idea of what to expect.  Last September, the brothers were reportedly finalizing a deal to direct the long-discussed live-action adaptation of Katsuhiro Otomo‘s graphic novel “Akira.”  The original Japanimation version was released in 1988.  According to slashfilm.com, “last we heard about the current screenplay, it was set in New Manhattan.  The original movie was set in Neo-Tokyo.  The city is a new megalopolis built decades after the destruction of the original Tokyo in what seemed to be a nuclear attack.”  Whether or not the Hughes Brothers actually take on the project is still tbd, however almost as soon as it was rumored that the guys would be doing it, there were reports that Albert left the project over “creative differences.” for the Love and Respect of the Hughes Brothers