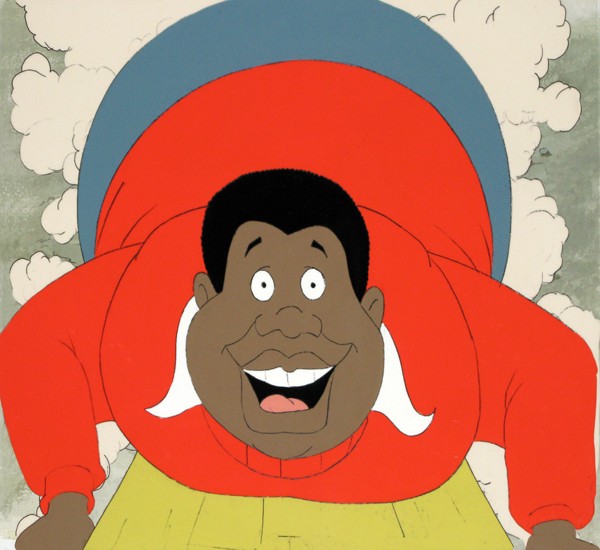 Fat Albert, Schoolhouse Rock, The Harlem Globetrotters: with their retro animation styles, these 1970s cartoons seem dated now, but in their time, they were groundbreaking.

FOR DECADES, BLACK CARTOON CHARACTERS WERE MOSTLY REDUCED TO RACIST CARICATURES. A NEW EXHIBITION SHOWS HOW ALL THAT CHANGED WITH A 1970S CARTOON REVOLUTION.

Before the 1960s, black characters in cartoons were uniformly reduced to racist caricatures–the more than 600 cartoon shorts featuring black characters from 1900 to 1960 were basically animated minstrel shows. But with the Civil Rights Movement came Saturday morning cartoons that featured black animated characters in a more positive light.

Funky Turns 40: Black Character Revolution, a new exhibit from the Museum of Uncut Funk at the Schomburg Center for Research in Black Culture, takes viewers on a tour of the cartoons and animations of the 1970s that were among the first to present positive black characters, helping to chip away at entrenched stereotypes.

“I believe these cartoons are national treasures,” curator Pamela Thomas said in a statement. “They were seen by a generation of children and not only changed the way that black kids saw themselves but the way white kids saw them as well.”

Many characters celebrated in Funky Turns 40 were the first of their kind: Peter Jones of The Hardy Boys in 1969 and Valerie Brown of Josie and the Pussy Cats in 1970 were the first positive Black characters in Saturday morning cartoon series. The Harlem Globetrotters andThe Jackson 5ive brought viewers the first positive black cartoon casts in 1970 and 1971. The character Verb on Schoolhouse Rock, with his theme song “That’s What’s Happening!”–a parody of Shaft and other Blaxploitation films–was the first black male superhero character in a cartoon. The first black female superhero, Astrea, in Space Sentinels, didn’t come along until 1977. For children, these characters were empowering instead of denigrating. These cartoons also gave voices to black animators, musicians, and actors, like Bill Cosby and Berry Gordy.

Forty years later, there’s still some work to be done. The first black Disney princess didn’t show up until five years ago, when Tiana made her overdue debut in The Princess and the Frog. Still, the legacy of the cartoons in Funky Turns 40 paved the way for their modern counterparts, like The Proud Family, Little Bill, Static Shock, Fillmore, and Doc McStufﬁns, which feature characters full of insight and wit.

Funky Turns Forty: Black Character Revolution is on view at the Schomburg Center for Research in Black Culture, Latimer/Edison Gallery in Manhattan until June 14th.