“GET ON UP” – The James Brown Movie 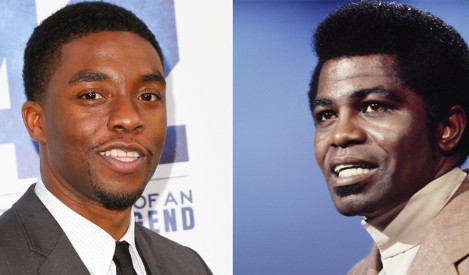 Chadwick Boseman, the star of the movie “42” based on the life of Jackie Robinson, has taken on the role of James Brown for the biopic “Get On Up.”  The film chronicles Brown’s life from poverty to his rise to mega success, as he became one of the most influential musicians in history.  World renown as “The Godfather of Soul”, Brown is unequivocally “The Pioneer of FUNK.” Directed by Tate Taylor (“The Help”, “Winter’s Bone”) “Get On Up” is being produced by Brian Grazer and Mick Jagger https://museumofuncutfunk.com/2013/03/17/the-drama-behind-the-scenes-of-the-james-brown-movie/ .  Boseman will be joined by a cast of several relative newcomers, amidst Oscar winners and nominees for the movie.  Viola Davis takes on duties as Susie Brown, James’ mother and Octavia Spencer will portray Brown’s “Aunt Honey.”  Davis and Spencer were the leads in Tate’s “The Help.”  Tika Sumpter (“Ride Along”) from Tyler Perry’s “The Haves and the Have Nots”

Although JB is from Augusta, GA, “Get On Up” was shot in Natchez and Jackson, Mississippi, the home state of director Tate.  According to Rolling Stone magazine on the second-to-last day of filming, the Mississippi Coliseum is a stand-in for the Boston Garden (now the TD Garden), where Boseman is playing Brown during a famous 1968 show — the night after Martin Luther King Jr. was assassinated.  “It’s a really hard role to do,” Jagger says, an hour later, during a break in filming.  “It would’ve been safer to take someone from Broadway who had a lot of dancing and singing background.  Chad would be the first to tell you, he wasn’t a dancer. But after he’d worked for six weeks on it, he immeasurably had become the character.”  Although Jagger says he and Brown weren’t close friends when the soul legend was alive (Brown died in 2006), he spent plenty of time with him in backstage dressing rooms and concert halls, studying and absorbing his stage demeanor, his dynamic relationship with his band and, of course, his dance moves.  “The way he interacted with the audience, the timing, I was taking it all in and trying to understand the whole picture of it,” Jagger told Rolling Stone. At first, Boseman was reluctant to take on another biopic, let alone the role of “The Godfather of Soul.”  He wasn’t sure if he should step in to the shoes of the man that started the genre of FUNK and influenced the likes of Michael Jackson and Prince.  It was Tate that believed in him, who says he “wanted someone with the red soil of that part of the country in their veins.” Boseman grew up in Anderson, South Carolina, which is not far from Augusta.  I for one am looking forward to seeing this movie, it’s scheduled for release at the end of summer, early fall.

for the LOVE of FUNK and James Brown