Spider-Man And The Eclectic Company Circa 1974 These stories involved the masked superhero foiling mischievous characters who were involved in petty criminal activities (such as burglary or assault). The cast of The Electric Company played the roles of the various characters in each story, with another serving as narrator. In many of these sketches, viewers were addressed as “true believers.”

Unlike other live-action and cartoon productions of Spider-Man, this version of the web-slinging hero did not speak out loud, instead communicating only with word balloons (having a similar role to Clarabell the Clown of Howdy Doody), in order to encourage young viewers to practice their reading skills because he was drawn without a mouth. He also never appeared out of his costume as Peter Parker and, given the series’ budget limitations, used his web-shooters sparingly.

The theme song that plays at the beginning and end of the shorts was written by Gary William Friedman. The lyrics are as follows:

Every issue of Spidey Super Stories featured at least one story where Spidey would team up with an established Marvel Comics superhero and/or fight an established Marvel villain. This served to introduce other Marvel characters to new readers who were unfamiliar with the company’s characters prior to seeing Spider-Man on The Electric Company. Most of these stories would feature quick origins, usually taking up a single page or less, of both the featured hero and villain. Guest heroes included Iron Man, Captain America, Doctor Strange, Spider-Woman, Nova, and Ms Marvel. Guest villains included the Green Goblin, the Blizzard, Jack O’Lantern, and even Thanos. 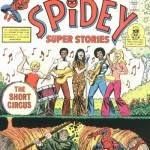 Spidey Super Stories Vol.1 #1 is a part of The Museum Of UnCut Funk collection.