Tina Allen is no longer with us but her sculptures can be seen around the world.

Tina Allen was born in 1955 in Hemptead, N. Y., Allen began painting at the age of five and was discovered at the age of 10 by William Zorach, who was considered one of the greatest living sculptors in the world. Allen was the daughter of Gordon “Specs” Powell, a studio percussionist for CBS Records. Allen, who was considered a social activist as well as an artist, created her first three-dimensional work when she sculpted a bust of Aristotle in high school. She soon began winning competitions and awards, but Allen revealed that though she had originally intended to paint, “sculpture was more natural for me than painting.” 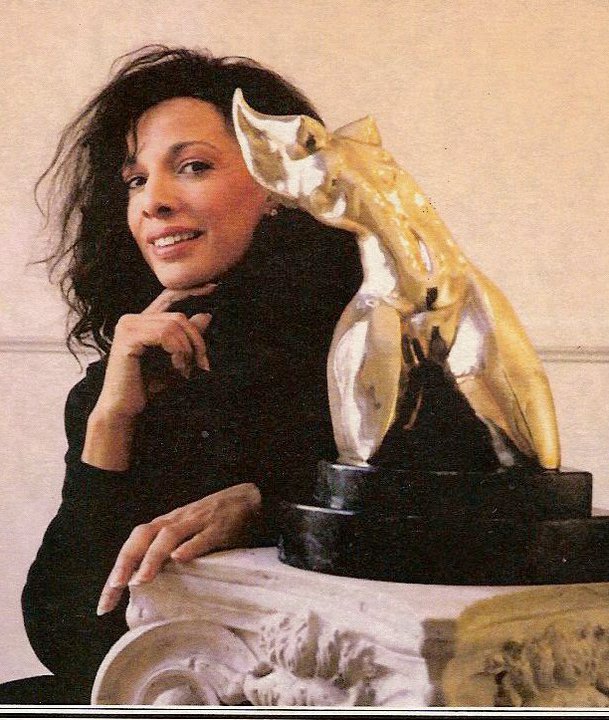 Allen studied art at the University of South Alabama where she received a bachelor’s of fine arts in 1978. She was a VISTA volunteer, and for nearly a decade, hosted a local television show on the arts. She eventually moved to New York City, where she attended the Pratt Institute and the New York School of Visual Arts. In 1986, she entered a competition in Boston for a commission to create a memorial statue of African American labor activist A. Philip Randolph, who founded a union for train porters in 1925. To her surprise and delight, Allen won the $85,000 commission and her career began in earnest.

In a profile of Allen on the University of Texas at Austin Web site, Allen describes her body of work as “writing our history in bronze” and her creations as “totems that tell the children this kind of behavior, this kind of person is worthy of attention”. In 1988, Allen moved to Los Angeles where she produced many sculptures and paintings that reflected the Harlem Renaissance. She also focused on the black male, which is shown in her creations entitled “Proud Father and Son” and “The Banjo Lesson.” Allen has promoted the contributions of African American women through her work entitled “Ethiopia.” Los Angeles County Supervisor Yvonne B. Burke, a long time friend of Allen, reflected, “I think all of us know that Tina was an exceptionally talented woman as a sculptress. Tina always did excellent work.” Burke recalls that Allen also possessed a great sense of humor. “She was the funniest woman I ever knew,” said Burke. “She would keep you in stitches for hours. She had an ability to lift you up and make you smile and to bring you out of whatever depths you’re in.’

Laura Hendrix, owner of Gallery Plus in Leimert Park, met Allen when she first moved to Los Angeles from New York in the early ‘80s. “I was devastated after hearing of Allen’s death. I was very fond of Tina and her work. She was an accomplished, world renowned artist and one of our cultural warriors.” Through her artwork, Allen wanted to leave a legacy for African American children. “Our children must be able to say greatness comes out of people who look like me,” she once said. Locally, Allen had been commissioned to create sculptures of community activists Lillian Mobley and Celes King Jr. She was also commissioned to create sculptings of Sammy Davis Jr., Alex Haley, Dr. Ralph Bunch, Marcus Garvey, Dr. Martin Luther King Jr. and Dr. Charles Drew, George Washington Carver, Sojourner Truth, Betty Shabazz, and Tupac Shakur. As her acclaim grew, Allen’s prodigious talent kept her traveling extensively to such far away places as Africa, Europe, and Asia, South Africa. Tina Allen’s work has appeared in the permanent collections of some of the most important institutions in the country including the Schomberg Center and the Pratt Institute in New York, the Museum of Afro-American Art in Los Angeles and the King Center in Atlanta. She makes much smaller abstract sculptures as well, and collectors of her art include Hilary Rodham Clinton, Muhammad Ali, Denzel Washington, and Robert DeNiro.

Tina Allen passed away on Tuesday, Sept. 9. 2008 of a massive heart attack due to complications of pneumonia. Check out this link to other great Black Monument’s across the United States –  http://newsone.com/1458145/top-10-monuments-to-black-americans/