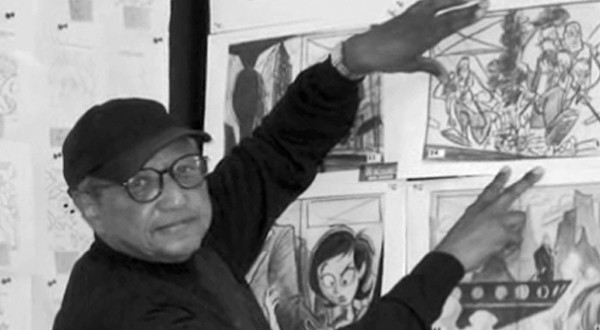 Floyd E. Norman  is a animator, writer, and comic book artist. Over the course of his career, Norman has worked for a number of animation companies, among them Walt Disney Animation Studios, Hanna-Barbera Productions, Ruby-Spears, Film Roman and Pixar. This is his article on his recollections of his pitch to Bill Cosby for his new animated show.


With all the recent allegations concerning Bill Cosby, I can’t help but think back to the first time we first met the famous comedian. Not yet a household name, Cosby’s career was clearly on the rise. Along with his personal appearances, recordings and a new television show it was only natural that animation was sure to follow. Little did I know I would be one day be sitting in Bill Cosby’s dressing room on the Warner Bros. studio lot.

The story begins back in the sixties when my partner, Leo Sullivan and I caught word of Bill Cosby possibly developing an animated show. The show would be based on one of Cosby’s hilarious comedy routines. Being familiar with Cosby’s material we immediately transferred one of Bill’s hit record albums to film. The popular segment was Cosby’s retelling of his kids days in Philly and a very interesting young man they called, Fat Albert. Leo and I decided to storyboard and animate a few “Fat Albert” segments from the recording. Once Bill Cosby saw the characters from his stand up routine suddenly spring to life the chances were good he’d give us a shot at developing his new television show. We were not inexperienced when it came to production. We had already run our own production company in Los Angeles and produced a number of motion pictures for the educational and government markets. Moving back into entertainment would be a breeze. Before long, Leo and I had produced what we considered enough hilarious cartoon animation to wow the famous comedian. With the film under our arm, we headed to Beverly Hills and the offices of Bill’s production company, Campbell, Silver, Cosby. It took a few tries but we finally managed a meeting with one of Cosby’s producers. The gentleman was Marvin Miller and he promised us a meeting with Mr. Cosby. Things were looking good, and a week or so later we arrived for our meeting with Bill Cosby. Arriving at Campbell, Silver Cosby we were ushered into a small conference room where we were surprised to see a guy we knew sitting at the head of the table. His name was Ken Mundie and he was already a legend of sorts in the animation business. “Maverick” is the word that best describes the progressive animator. Too radical for most production houses, Mundie marched to his own drum. He was a talented animator, designer and painter who spent winters in Europe giving skiing lessons to the wealthy. Lean and athletic, he was the opposite of most geeky animators who tended to be pudgy and pale In spite of Ken’s considerable talent, we couldn’t help but feel somewhat bummed out our friend and colleague and gotten the jump on us.

Looking back on those days I shouldn’t have been surprised. Ken Mundie had already met Bill Cosby some years earlier and that gave him an edge. Among Ken’s many talents was his skill as a title designer. He had designed show titles for feature films and television shows. One of Ken’s best known sequences was a title he designed for the hit TV show, “I Spy” which starred Cosby and actor, Robert Culp. Mundie had designed and directed the opening titles that required the two stars to spin on a turn table. This meant the animator already had access to the famous comedian and probably pitched the show idea long before we animated our little cartoon piece. Having gained Bill Cosby’s confidence, Ken Mundie was hand picked by the star to helm the comedian’s first foray into animation. It was a win-win for both all the way around.

To read more of this article please visit http://floydnormancom.squarespace.com